Every morning when you get dressed there’s a long list of items that have become so familiar to you that it’s easy to take them for granted. But there’s a lot of ingenuity and innovation that’s gone into your wardrobe.

Here’s the origins of five clothing-related items that might make you cherish your wardrobe more:

Roman women were reportedly wearing undergarments thousands of years ago but it wasn’t until the 1800s that women were recorded wearing them again (whoa, that’s more than a thousand years of going commando, ladies!). At that time, women began wearing light skirts under their dresses because they were easier to launder than the actual dress (women had fewer clothes back then and bathed much less often – thus, the need for “undergarments”).

Then women began to wear pantaloons, light fabric that went on each leg and stopped below the knee or at the ankle. Because these pantaloons were two separate leg coverings, joined at the waist, they were correctly called “a pair”. Women’s underwear evolved over the years with various names – such as bloomers and knickers – but in the early 1900s, the term “panties” stuck.

By now, however, they were all one piece. Still, they continued to be referred to as “a pair”, just as they are today. Then, as hemlines went up, panties became shorter. And shorter. And shorter still. Add in some frills, color and beautiful fabrics and you have today’s modern panties.

Imagine your winter coat or your luggage without a zipper. Seemingly simple, the zipper helped transform the clothing industry partly by making it so much simpler to close up dresses and other items.

Today’s zipper has a few key people to thank for its existence. Massachusetts inventor Elias Howe first came up with an early version of the fastener in 1851, but he didn’t publicize it much so its use didn’t become widespread. Over 40 years later at the 1893 World’s Fair in Chicago, inventor Whitcomb Judson improved the design. He called it the “Clasp Locker” and it became popularized for shoes. While Judson is often given credit for developing the zipper as we know it, it was actually an engineer he hired, Gideon Sundback, that designed a practical version that could be closed easily and “automatically” with two rows of interlocking teeth.

1917 patent of the “separable fastener” (zipper) by Gideon Sundbäck.

B. F. Goodrich, the tire company, actually created the word “zipper” when it used it for closing a new type of rubber boot it made in 1923. It still took another 20 before the zipper came to be used on clothing, finally catching on when it was advertised as a way to help young kids dress themselves.

The beginning of the modern bra is credited to French lingerie designer Herminie Cadolle back in 1889. At that time, the restrictive corset undergarment was common but it was uncomfortable and some even considered it unhealthy. Many were ready for a change.

Cadolle developed an item that basically divided the corset into two pieces, with the top supporting the breasts and the bottom holding in the stomach. She also introduced the use of “rubber thread” or elastic (that’s pretty amazing in itself!). She patented her invention and it was sold as a two-piece garment until 1905 when the upper part, the early bra, started being sold alone.

The metal shortage due to World War I helped the bra take off (no pun intended) by decreasing the availability of corsets. By the end of the war in 1918, most fashionable women in Europe and North America were wearing bras.

An early bra from a 1902 French catalog (still with heavy boning) and a silk bra from our website (thankfully with no boning!)

Most of our clothes owe a major debt to Elias Howe, who invented and patented the sewing machine in 1846. (If his name sounds familiar that’s because he also had a role in inventing the zipper. Impressive, right?)

There were several earlier versions of the sewing machine prior to Howe. In the late 1700s, for example, an Englishman invented a machine for stitching and quilting but the threading came apart. Howe came up with the idea for a machine that used a lockstitch, pulling a second thread through the loop of the first and thus the first version of the modern sewing machine was born.

Howe showcased his invention in a race against five seamstresses and he won handily, finishing five seams before they had completed one. That didn’t convince many to actually buy it though. The £250 price ($31,500 in today’s dollars) was probably a bit prohibitive. 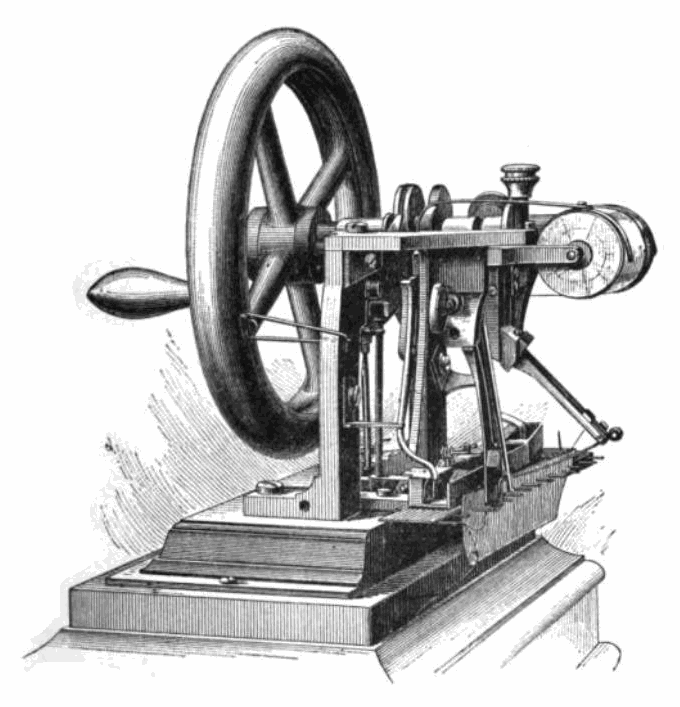 Drawing of the first patented lockstitch sewing machine, invented by Elias Howe in 1845 and patented in 1846

Howe was broke and unemployed for years before the machine took off when Isaac Singer invented a sewing machine that could sew about 900 stitches per minute, outpacing any other machine and certainly the average skilled seamstress who could only sew 40 to 50 stitches per minute.

Epilogue: The Singer sewing machine was based on the “two-threaded lock-stitch method” and made several improvements but Howe sued Singer for patent infringement, won, and eventually received substantial royalties from the sale of sewing machines.

Consider all the clothes hangers you have known in your life: wire ones, plastic ones, puffy satin ones, lovely wooden ones, rubberized pant hangers, and so on…

Back in 1903, when there weren’t enough hooks to hang coats on at the office of Timberlake Wire and Novelty Company, or so the story goes, employee Albert J. Parkhouse bent and twisted a length of wire together into two ovals with the ends twisted together to form a hook, an early version of today’s clothes hanger.

The company patented his invention, and eventually, employees were hanging their coats up on his hangers and the rest of us have been hanging our clothes on hangers that still pretty much have the same shape!